In November, Sydney & Melbourne played host to the first year of La Marzocco Australia’s Crush The Rush ‘Straight into Summer’ – a tournament-style coffee competition which focuses on workflow, efficiency, teamwork & fun.  Where 40 teams of 3 baristas each were invited to put their speed coffee making abilities to the test on the new KB90 with ABR scale technology.

The competition had already been hosted throughout the US for two years, as well as being a feature at La Marzocco UK’s ‘Out Of The Box’ event recently, and the main man behind the La Marzocco USA event Josh Littlefield, joined the Australian team to lend his expertise.

Teams competed in time trials of the same coffee order using the same equipment & same coffee, with the top 8 in each city moving on to the knockout tournament in the evening, in which a prize of $1000 went to the winning team while they were also given the opportunity to donate $1000 to charity of their choice. Times were extremely competitive, with 2 teams in Melbourne (Axil Roasters & St. Ali) posting new world record times of the universal drink order sub 3 minutes! 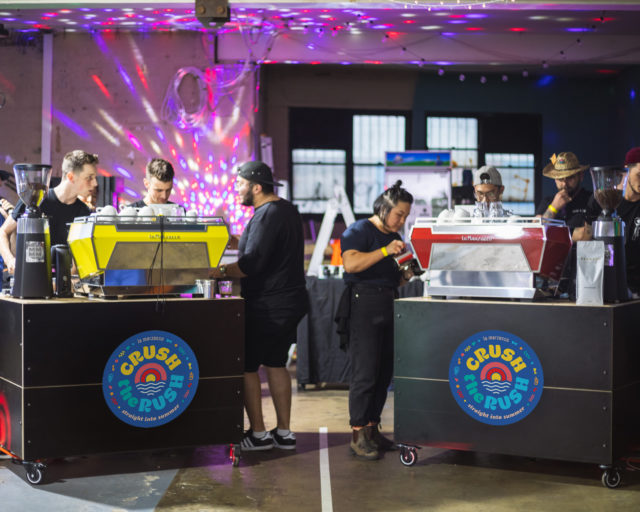 The first event was hosted at Sydney’s Specialist Coffee Curators co-roasting space, it was Toby’s Estate, Whitehorse & Single O that set the fastest times going into the main event. As the crowds gathered – fuelled by Moondog Brewing, party tunes & tacos and were entertained with new cafe-focused challenges, nail-biting upsets & fast moving group handles, it was ONA Coffee’s interstate team of Highroad Canberra who took out the title of the inaugural Crush The Rush Sydney Champions. Their worthy charity of choice was the St. Vincent De Paul Bushfire Appeal.

The Crush The Rush Australia team then packed up a truck and continued the road trip tradition, making their way down to Melbourne.

In true Melbournian style, a huge empty warehouse due for demolition down the street from La Marzocco Australia’s HQ in Abbotsford played host to the Melbourne competition. As previously mentioned, in the time trials Axil Coffee wowed the judging panel as they blasted through 8 beverages in under 3 minutes, however teams from St. Ali & Vacation were not too far behind.

The main event brought more new challenges – from a thanksgiving pie search to an avocado with vegemite on toast round. This paired with lasers, tunes and a huge amount of beach balls, brought the competitive energy levels up. There was even a masseuse on site to cater for the baristas forearms mid rounds! Ultimately, it was an independent team from various cafes around Melbourne who took out the ultimate prize – a perfect result to a competition focused around community, mateship & teamwork. Their charity of choice was UNICEF Japan.

A huge thanks goes out to all of the sponsors: Mazzer, Barista Technologies, BWT, Minor Figures, Keepcup, Brewtech, Moondog Brewing & St David’s Dairy.

La Marzocco Australia & the coffee community down under are already looking forward to next year for the second tour of Crush The Rush! See you there…